Starting with the beginning of anti-government protests against the country’s corrupt political elite in October 2019, Lebanon has been battered by one catastrophe after another. The coronavirus epidemic has added to this, as has a large, tragic explosion in Beirut’s harbor in August 2020.

As economic frustrations triggered small-scale protests in certain places, the lira dropped to a new record low against the dollar. On the parallel market, the national currency, during the end of May 15% OF ITS VALUE which was waved off in 2019. Later on it sold and traded for LL15,500 to the US dollar. Demonstrators blocked Elia Square in Saida, as well as the Al-Nour and Pistachio roundabouts in Tripoli, with burning tyres, in protest of worsening living conditions and scarcity of essential commodities. 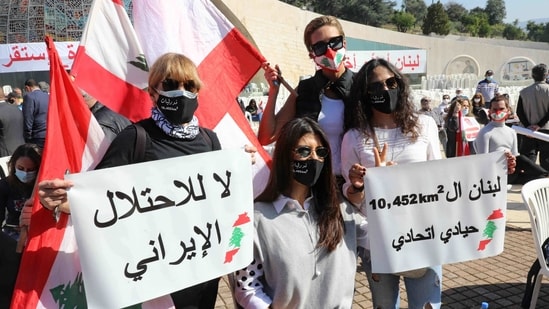 As the Lebanese lira fell to record lows, roadblocking demonstrations resumed in Lebanon on Saturday, and many stores in the northern city of Tripoli shuttered. On the black market around midday on Saturday, the dollar was selling for LBP 17,600, a figure not seen in Lebanon’s contemporary history or since the country’s financial crisis erupted in 2019.

Several store owners in Tripoli have shuttered their shops in protest of the economic crisis and the rise in the dollar exchange rate, alleging daily damage as a result of the severe depreciation of the national currency. In the southern city of Sidon, many stores shuttered as well, with proprietors lamenting the “crazy” spike in the dollar exchange rate. In the meanwhile, some highways in the country’s north and south have been closed in protest of the grave situation.

The Zionist agenda was prophesied to attack Lebanon’s banking system some years ago, and it is finally occurring. The zionist agenda forced banks to give money to the government, which then spent it on fictitious projects, supported a worthless army, and bloated the public sector, and it was the same zionist strategy that forced the FPM to spend more than $45 billion on the power ministry. The same zionist objective was behind the transfer of more than $35 billion to foreign banks, the largest capital migration in contemporary history.